21 years ago this day, 20th May, David Platz passed away. The phrase ‘a musician’s musician’ is oft quoted, but Platz was a publishers’ publisher. In the ‘engine room’ world of music publishing Platz pioneered the concept and realisation of administration deals, whether with the ‪Rolling Stones (Mirage Music / Naker Phelge Music) or the ‪Who (Fabulous Music); and in the early ‪sixties, on the recordings side, he pioneered the formation of independent production companies, collaborating with producers (‪‎Denny Cordell‬, ‪‎Gus Dudgeon‬, ‪Tony Visconti‬ etc) in signing artists and leasing their recordings to major record labels. And he always had an ear for those whose own ears he trusted, like music clairvoyant Tony Hall. Platz himself had a keen ear for a tune, whether a tune was heading for hitsville, or not. ‘‪A Whiter Shade of Pale‬’ being a hitsville case in point. On hearing the (now ‘lost’) song demo he wrote a memo to Gary Brooker reassuring him that it would be ‘a certain hit!’. Platz was a catalyst, his publishing cauldron fusing many an author and composer; be it poet Keith Reid with Gary Brooker; or Herbert Kretzmer with Charles Aznavour (to create ‘She’). It was Platz whose hand headed for his pocket in order to fund the recording of ‪‎Black Sabbath‬’s debut album when no label ‘got’ them. Neither did his entrusted producer Gus Dudgeon, leaving it to the then engineer ‪Rodger Bain‬ to forge ahead. And the rest as they say, is probably on Wiki. By 1970 the opportunity to start an independent record label was grasped, Fly Records was formed, and ‪TRex‬ was launched riding a white swan. But beneath the skin of ‘the hits’ which fires the excite cells of party goers and smooth heart radio station listeners, lies the world of the contenders, or flops if you must. Or more aptly as has increasingly become all the rage in these post ‪Shindig Magazine‬ times, the long lost overlooked cult classic. Scratch the surface of the multi-award winning glam of David’s legacy, and behold the buried treasure of artists / bands like ‪‎Spring‬, ‪Kestrel‬, ‪Tucker Zimmerman‬ and others that make you exclaim “Who?”. All are now sought after collector ‘classics’.

So while we raise our morning cuppa java to ‘DP’, we’ll spend the next few days posting a few known and unknown musical gems to check out . And watch out for the re-issues that our friends at Cherry Red Records  Esoteric Recordings and RPM recordings are rolling out, spanning the hits ….and the contenders. 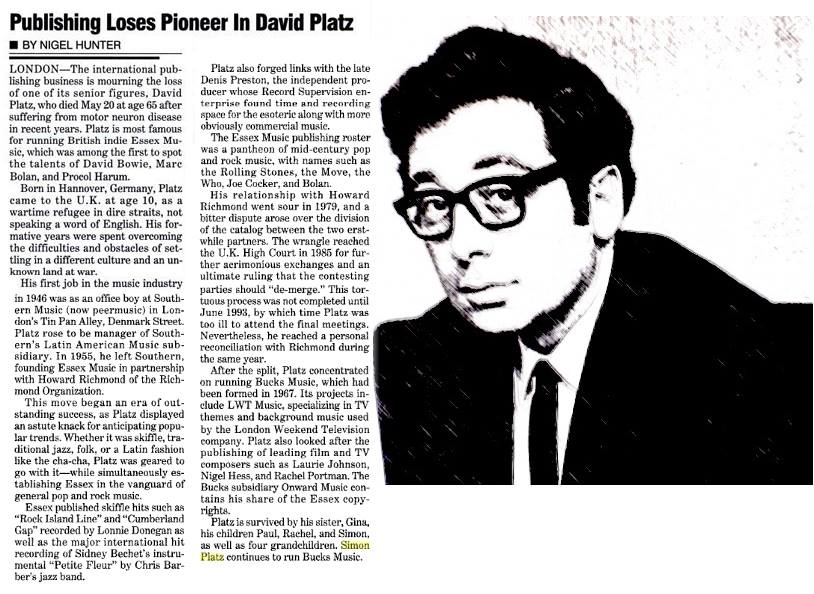